Hello, my dear coffee addicts and the lucky ones who can see life in color without this magical drink!

Coffee has been part of my daily life for a few years now and is my bff when it comes to ‘getting shit done’ or simply making me realize that sometimes not everyone is annoying – I am just tired. Having been used to the productive Latvian coffeehouse environment where everyone is fighting for the seats closest to the sockets for their overheated laptops, sipping their large caramel macchiatos and avoiding any eye-contact, it was a bit of a culture shock realizing that in Italy they have a completely different view on cafes and coffee in general. Have I lived my life all wrong and this is actually how you should be drinking your coffee? Should I change my ways? And, hence, which are ‘the ways’?

To find this out, I  interviewed 7 Italians during our weekly Linguistic Aperitive and gathered some stereotypes from 7 fellow Latvians on Italian coffee-drinking habits. What does the data show? Well. I hope you like charts.

I wanted to find out the real situation so I asked the people from the aperitivo about their personal coffee drinking habits.

First, not all Italians drink coffee. From the 7 people I interviewed, 5 of them drink coffee daily (3-4 cups on average), 1 rarely (3-4 cups per week) and 1 does not anymore.

For many of them, coffee consumption also very much depends on their planned activities. More coffee is consumed during studying sessions or as a social activity, which will be touched upon later in this blog.

Second, there are many (overall 6) types of coffee present in the daily lives of Italians. The most popular type of coffee Italians drink daily is espresso (33,3%)

I also stumbled upon a type of coffee I had never heard before – ginseng coffee.

It is said that it’s pretty common in Italy so I am surely going to try it. Maybe my next blog is going to be about that.

Third, turns out that there is also a specific time for each type of coffee. 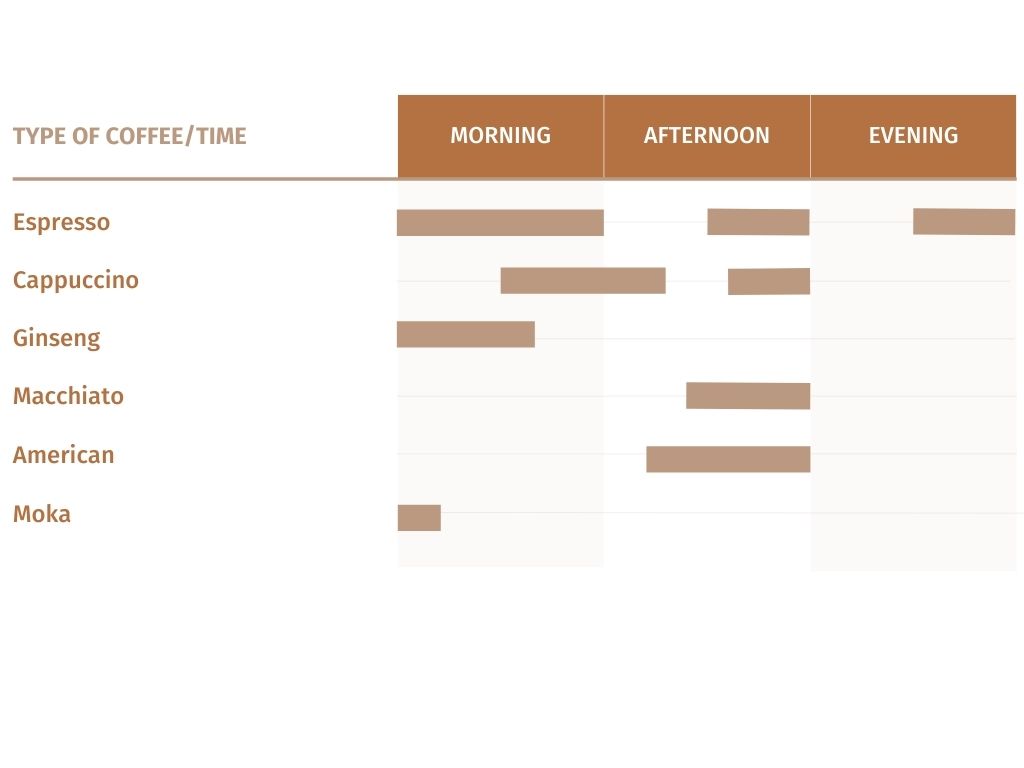 Based on the data gathered, Italians drink espresso almost all throughout the day, even in the evening. They tend to drink coffee after big meals, therefore, a lot of the types are drunk in the afternoon. The choice depends on the person though. Also, mornings definitely score high in coffee consumption, followed by some extra cups during working hours from coffee machines they have in their workplace.

Turns out I am quite far from the average Italian coffee drinker which supposedly is drinking 3-4 espressos per day, in the morning and after big meals (I don’t drink espressos – I’m a latte girl; however, cappuccinos here are amazing and I could drink them all day).

But now, let’s get to the most interesting part of the research – stereotypes. Love them or hate them, but they always exist and I was very fascinated to see how far foreigners (in this case – Latvians) would be from guessing the reality of coffee in Italy and how far the Italians themselves would be from their imagined coffee drinking culture in their country. 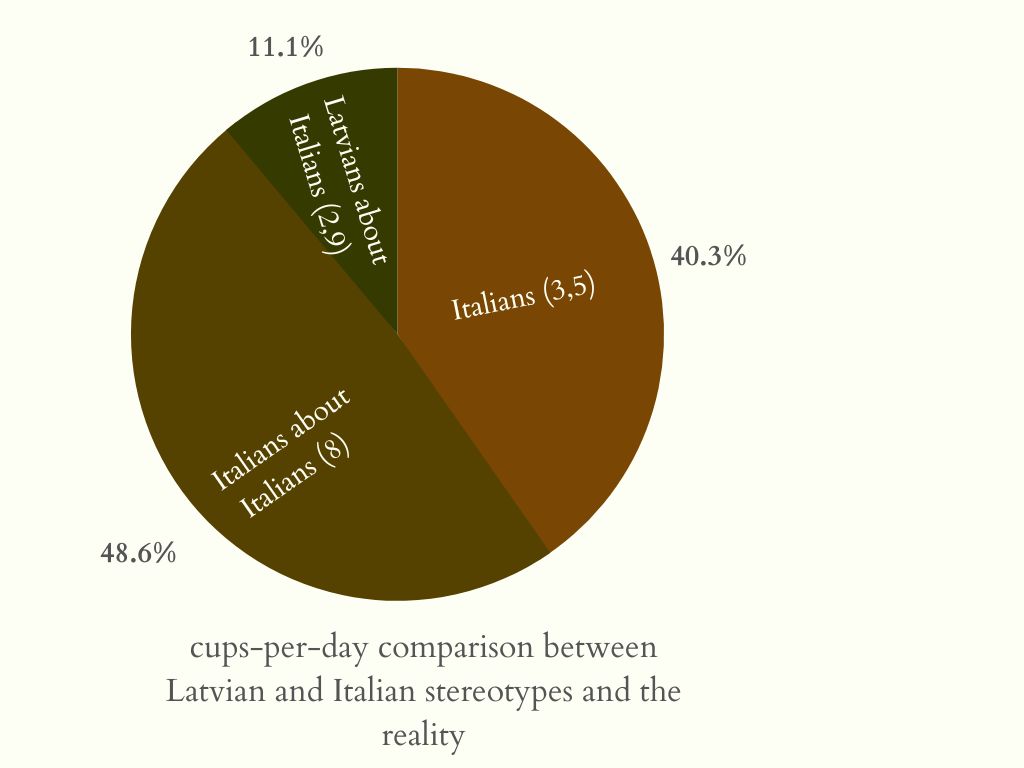 Latvians have been quite cautious guessing the frequency, but Italians… well. Although they themselves don’t drink that much coffee, they surely think everyone else does (on average 8 cups per day!!). Many of the interviewed mentioned that a lot of people in Italy are addicted to coffee, drinking even up to 15 cups per day (!!).

Overall, the answers are not that far from the truth, as at least all of the mentioned types are actually part of the daily lives of Italians. However, people tend to assume less of a variety in the existing coffee culture. Latvians only mentioned two types of coffee overall – espresso or very strong coffee in general and cappuccino. All of them (7) said espresso, making it the stereotypical drink by the eyes of foreigners. Italians did mention more types, adding moka and macchiato. Espresso scored the highest also in the eyes of Italians which does match with the reality, yet what’s going on with the cappuccino? Being the 2nd most popular choice for foreigners, it only scores 3rd in what Italians think about other Italians, giving a warm welcome to the wonderful moka.

Anyways, what about the times of day? 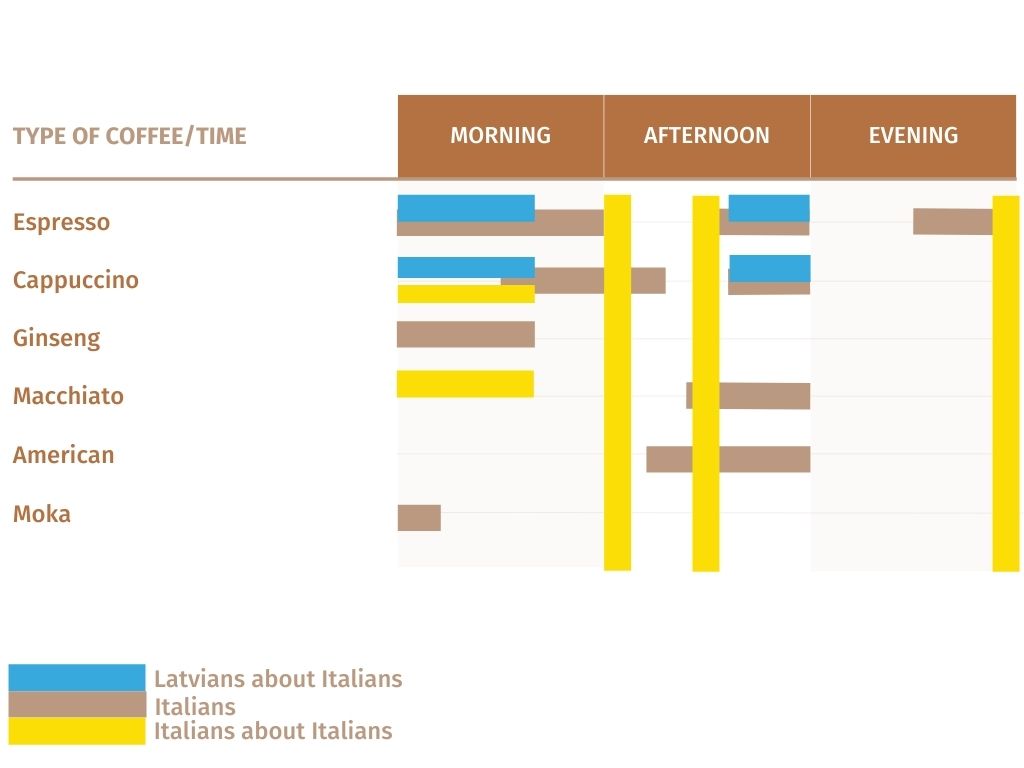 Most Latvians say that the most popular time of day for coffee is the morning when Italians mostly drink espresso (5 answers) and sometimes cappuccino (2 answers). Italians also mention breakfast, adding macchiato to the game. In real life, none of the interviewed mentioned macchiato as part of their morning routine, but the other answers match.

In the afternoon, most Latvians chose espresso again (surprise, surprise), yet, Italians did not specify a certain type, only that they would usually drink coffee before or after lunch and especially after huge meals. This does match with reality as well. Therefore, I can conclude that regarding times of day, it is quite hard to go wrong with when to drink coffee in Italy.

Lastly, I wanted to find out the reasons behind Italian coffee drinking culture.

The most popular answer I got was that it’s a SOCIAL activity/ritual:

Here I can finally conclude my research. But the initial questions remain – is this the correct way and should I change my ways? Or rather… have I already changed them unintentionally? I think I am getting better at the socializing part and most of my coffees tend to involve people nowadays, but espressos… well, maybe someday. Also, then I should also start practicing taking the coffee killer (Ammazzacaffè), Maybe I’ll rate those some other time.